Poseidon, Apollo, Artemis. Three of the most important Greek Gods.

Poseidon is one of the twelve Olympian deities of the pantheon in Greek mythology,brother of Zeus and Hades. His main domain is the ocean, and he is called the “God of the Sea”. Additionally, he is referred to as “Earth-Shaker” due to his role in causing earthquakes, and has been called the “tamer of horses”. He is usually depicted as an older male with curly hair and beard. Apollo is one of the most important and complex of the Olympian deities in ancient Greek and Roman religion and Greek and Roman mythology. The ideal of the kouros (a beardless, athletic youth), Apollo has been variously recognized as a god of light and the sun, truth and prophecy, healing, plague, music, poetry, and more. Apollo is the son of Zeus and Leto, and has a twin sister, the chaste huntress Artemis. As the patron of Delphi (Pythian Apollo), Apollo was an oracular god,the prophetic deity of the Delphic Oracle. Medicine and healing are associated with Apollo, whether through the god himself or mediated through his son Asclepius, yet Apollo was also seen as a god who could bring ill-health and deadly plague. Amongst the god’s custodial charges, Apollo became associated with dominion over colonists, and as the patron defender of herds and flocks. As the leader of the Muses (Apollon Musegetes) and director of their choir, Apollo functioned as the patron god of music and poetry. Hermes created the lyre for him, and the instrument became a common attribute of Apollo. Hymns sung to Apollo were called paeans. In Hellenistic times, especially during the 3rd century BC, as Apollo Helios he became identified among Greeks with Helios, Titan god of the sun, and his sister Artemis similarly equated with Selene, Titan goddess of the moon. Artemis was one of the most widely venerated of the Ancient Greek deities. Her Roman equivalent is Diana.Some scholars believe that the name, and indeed the goddess herself, was originally pre-Greek.Homer refers to her as Artemis Agrotera,Potnia Theron: “Artemis of the wildland, Mistress of Animals”.The Arcadians believed she was the daughter of Demeter. In the classical period of Greek mythology, Artemis was often described as the daughter of Zeus and Leto, and the twin sister of Apollo. She was the Hellenic goddess of the hunt,wild animals,wilderness,childbirth,virginity and protector of young girls, bringing and relieving disease in women. She often was depicted as a huntress carrying a bow and arrows.The deer and the cypress were sacred to her. In later Hellenistic times, she even assumed the ancient role of Eileithyiain aiding childbirth (part from the Parthenon’s East Zoforos 447-432 BC – Acropolis Museum). 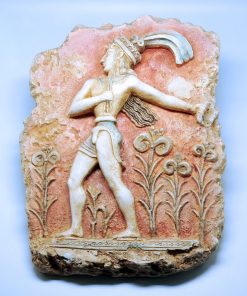 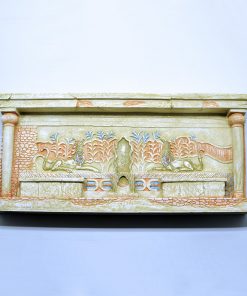 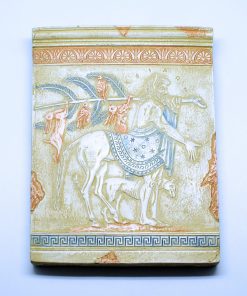 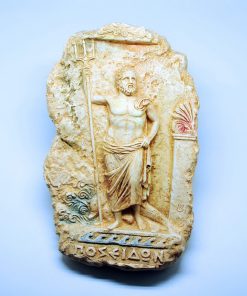 46.00 €
We use cookies on our website to give you the most relevant experience by remembering your preferences and repeat visits. By clicking “Accept All”, you consent to the use of ALL the cookies. However, you may visit "Cookie Settings" to provide a controlled consent.
Cookie SettingsAccept All
Manage consent